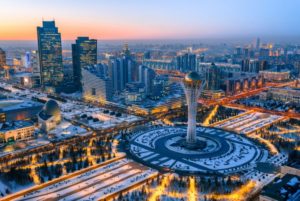 Kazakhstan, a Central Asian country and former Soviet republic, extends from the Caspian Sea in the west to the Altai Mountains at its eastern border with China and Russia. Its largest metropolis, Almaty, is a long-standing trading hub whose landmarks include Ascension Cathedral, a tsarist-era Russian Orthodox church, and the Central State Museum of Kazakhstan, displaying thousands of Kazakh artifacts. In this article we want to talk about best universities in Kazakhstan and Kazakhstan university rankings so read the entire article.

Al-Farabi Kazakh National University (KazNU)  is the leading institution of the system of higher education of the Republic of Kazakhstan and one of the top university of Central Asia. As the oldest university in the region, KazNU will celebrate 85 years anniversary in 2019. Today, KazNU counts not only the best Kazakh academics as its alumni, also counts great number of ministers, governors, top managers, members of Parliament, CEOs of National corporations and Olympic Champions. Several world-renowned scholars including Nobel Prize winners – such as John Forbes Nash, Finn E. Kydland, Roger D. Kornberg, Christopher Pissarides and Murray Gell-Mann – gave a series of lectures to KazNU students.

Al-Farabi KazNU is the leader of the National Rankings among the universities of Kazakhstan. The university was the first laureate of the Presidential Award of the Republic of Kazakhstan “For Achievements in the Area of Quality” and laureate of the Award of the Commonwealth of Independent States (CIS) for achievements in the area of quality and services in the history of the country. Al-Farabi KazNU was ranked 220 in the QS World University Rankings 2018/19, making it Kazakhstan’s highest ranked university. Al-Farabi KazNU is ranked 11th in the Emerging Europe and Central Asia (EECA) University Rankings. The university is a member of the following international organizations:  the International Association of Universities, European Society for Engineering Education, the international Association for the Exchange of Students for Technical Experience and International Observatory on Academic Ranking and Excellence, and the Indo-US Collaboration for Engineering Education.

L.N. Gumilyov Eurasian National University is the only young university from Kazakhstan entered the QS Top 50 Under 50.

ENU is located in Astana, the fast-growing capital city of Kazakhstan, in the heart of Eurasia.

ENU actively participate in state program “Development of education hub in Central Asia” and nowadays host more than 3% of international students from 25 countries of the world.

ENU is working on developing services for international students therefore WELCOME center is at their disposal.

ENU has adapted and actively promotes the Bologna principles of academic mobility among faculty and students. This open policy of integration into the world educational arena has enabled ENU to send its students abroad for study at leading universities and to host students from Europe, Asia, and North America.

Our students have the opportunity to study in the USA, Germany, Japan, Korea, France, Latvia, Poland, China, etc.

The Kazakh National Research Technical University after K.I.Satpaev (KazNRTU) intends to be the international research university linking academics and students of the world.
The oldest and one of the most prestigious technical universities in Kazakhstan, known for the developments in the fields of mining and oil business. For more than 80 years, the university has been synonymous with technological progress and leadership in Kazakhstan. Although Satbayev University’s business card is dominated by technical specialties, it is an interdisciplinary university where architecture and management are taught, too.

SKSU is the largest regional university of Kazakhstan and is traditionally the leading one in Kazakhstan HEIs rating. The University offers 47 master programmes in education, law, social sciences, business science, humanitarian, engineering and technological specialities, art and culture. SKSU offers 9 PhD degree programmes. The instruction is carried out in three languages Kazakh, Russian and English by 1675 highly qualified academic staff. The educational process is carried out according to the credit technology basis providing the students with individual strategy of training, a lot of elective courses and variety in programs. The result is absolutely great: all the graduates of SKSU are highly demanded at the labour market. The staff of SKSU effectively introduces into the teaching process innovation approaches, new ways and methods of teaching. The human resources of SKSU are really competent. SKSU is the member of EURASHE (European Association of HEIs), Eurasian Universities Association, CIS Networking University, Technical Universities Consortium EU-Kazakhstan. M.Auezov SKSU signed agreements on collaboration with more than 80 HEIs and scientific-research institutions. It collaborates with companies and HEIs in UK, Greece, Germany, Russia, European INTAS. Confirmation of active academic cooperation between the university and European HEIs is realization of double master degree programmes…

The first Kazakh higher education institution was established in September 1, 1928 and was named Kazakh State University. Abai Kazakh National Pedagogical University is one of the major higher educational institutions of Kazakhstan. A system of lifelong education has been developed and is almost introduced in the university. Today KazNPU and its subdivisions include 10 faculties. The training of specialists is handled in 60 chairs in 54 specialties. 25 thousand students study in full-time, part-time, distance learning, evening departments of the university. Moreover, there are pre-university departments (1,5 thousand students). Abai KazNPU joined union of European universities (Magna Charta Universitatum). Joining Magna Charta means the participant of the agreement complies with all international standards in the field of education and science, and is one of the most prospective educational and scientific centers of the world.

I like Kazakhstan so much because I was born there! What cool universities!