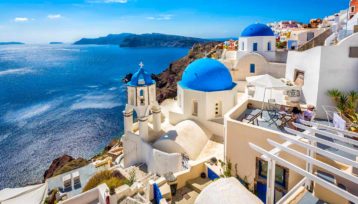 Greece is a country in southeastern Europe with thousands of islands throughout the Aegean and Ionian seas. Influential in ancient times, it’s often called the cradle of Western civilization. Athens, its capital, retains landmarks including the 5th-century B.C. Acropolis citadel with the Parthenon temple. Greece is also known for its beaches, from the black sands of Santorini to the party resorts of Mykonos. In this article we want to talk about best universities in Greece and Greece university rankings so read the entire article.

Founded in 1837, almost along with the modern Greek state, NTUA is the oldest Technical University in Greece. Initially established by a royal decree “on architectural education” it was a technical school operating on Sundays and holidays which offered instruction to those desiring to master in architecture. Though, at a remote location it soon attracted many students. Its popularity lead to the extension of courses and by spring 1840 to the operation of a regular day school along with the Sundays counterpart. It was then moved to its own building on Piraeus street. The joint efforts of students and instructors contributed to a continuous growth and to revising standards.

Although undergraduate studies at all public Higher Education Institutions are tuition-free for all students -according to the Greek Constitution- it is allowed to have tuition fees for postgraduate programmes. It depends on the Senate of each University and on the General Assembly of the relevant Departments to decide on that. Master Degree Programs at AUTh: Breakdown as follows: 48 Master Programs, 1 Greek-French, 1 Erasmus-Mundus, 16 Interdisciplinary, 2 with other Universities. Furthermore AUTh has 20 special Agreements (Protocols) for PhD. The PhD level ends up to academic/research doctoral degrees.

3. National and Kapodistrian University of Athens

The National and Kapodistrian University of Athens was founded on 3rd May 1837. As it was the first university in the newly established modern Greek state, as well as in the Balkans and the Eastern Mediterranean region, its socio-historically significant role has been decisive for the production of knowledge and culture in the country. Today the University of Athens is the largest public institution of higher education in Greece, and among the largest universities in Europe. It is a legal entity of public law with 32 Faculties and 111 Postgraduate programmes of all disciplines, 158 Laboratories, 69 Clinics (included in 4 University Hospitals), 6 Central Libraries, a Modern Greek Language Teaching Center, a Center of Foreign Languages etc. The University of Athens is a member of International Associations (EUA, IAU, EAIE) and University networks (UNICA, UNEECC etc.) and is also a member of the International Network “Agence Universitaire de la Francophonie”.During the last 20 years, under the framework of the LLP/ERASMUS programme the University of Athens has sent about 8000 students to partner Universities and has received more than 3800 incoming students. For the current academic year the University has established 576 Erasmus bilateral agreements with 310 Institutions from 30 European countries and about 480 outgoing and 300 incoming students are expected to be exchanged.The University also participates in a number of Erasmus Networks, Intensive Programmes and Curriculum Development projects. It also participates in other programmes of the LLP such as Comenius, Grundtvig, Jean Monnet as well as in other European educational programmes (e.g. Tempus, Alfa).There is also cooperation with many European Universities for the creation of International Joint Masters and Doctorates as well as for the elaboration of doctoral theses under co-supervision (cotutelles).

The University of Crete is a young and dynamic academic institution committed to excellence in research & teaching. The University was established in 1973 and accepted its first students in 1977-78. It now has 17 Departments in 5 Faculties : Philosophy, Education, Social Sciences, Sciences & Engineering, and Medicine. Currently more than 2,000 postgraduate students study here, taught by an outward looking faculty and support staff of over 630 with experience in higher education institutions worldwide. The University offers over 36 Masters programmes in subjects ranging from Byzantine Studies through to Molecular Biology and PhDs in all areas of the University’s research expertize. Research students benefit also from the close collaboration between the University of Crete and the Foundation for Research and Technology – Hellas (FORTH). The international orientation of the University is reflected in its track record of collaborations with many of the leading research and educational organizations in Europe and by the opportunities offered to students and staff through its active participation in mobility and exchange programmes.

The university of of Patras since its foundation in 1964 has been committed to pioneering teaching and research. Built in a beautiful campus, it offers a true academic environment, making studies in it a true academic experience. The University plays a co-ordinating role in developmental initiatives for the benefit of the Region of Western Greece, communicating the constantly generated scientific knowledge and know-how to industry. On the international scene the University is very active, participating in a large number of European and international Educational and research programmes and consortia and in all major academic associations. Its forefront scientific research has been recognized internationally. To those of you who will come to the University of Patras, a very warm welcome!